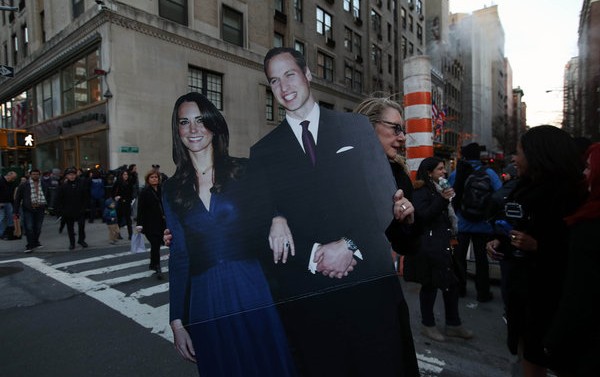 The most adorable British Royal Couple the Duke and Duchess of Cambridge, William and Kate arrive in New York City at Sunday as they begin a busy three-day visit to the United States. The couple’s toddler, Prince George, did not make the trip. Huge crowd gathered around the Carlyle Hotel in Manhattan including a throng of media, who were kept behind police barricades across Madison Avenue.

Kate, 32, pregnant with 5th month, on the spot dressed up with wearing a coat with British maternity label Seraphin, for the very first time she was noticed for wearing a high street pregnancy tag for her second pregnancy. The royal couple who are expecting their second child in April met at the luxury Carlyle Hotel, where the royal family members William’s late mother, Diana, Princess of Wales stayed with general manager an approximately 200 public. Other celebrity guests over the years have included Michael Jackson, Steve Jobs, John F. Kennedy and Marilyn Monroe.

William and Kate have planned to visit of events in New York, as well as a trip for National Sept. 11 Memorial and Museum and a basketball match between teams Brooklyn Nets and the Cleveland Cavaliers.

In their trip they have decided that they will part ways momentarily when on Monday William will visit the White House to greet with President Obama. The agenda of the meeting is to talk about combating illegal trade in wildlife parks.

Kate was scheduled to tour a New York child development center with the city’s first lady, Chirlane McCray to meet youngsters at North side Center for Child Development in Harlem, that works for mental health with educational services to high-risk neighborhoods .

The royals have plan for attending on Tuesday night solicitor dinner at the Metropolitan Museum of Art to support the University of St. Andrews in Scotland, where they both met and done their college.