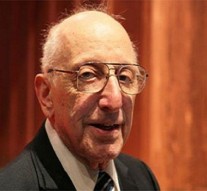 No Comments on Father of Video-Games Ralph Baer Died

After his remarkable invention, He was offered by many prestigious companies like Microsoft, Sony and Nintendo. In 1966, Baer was stuck with the video gaming idea while waiting for his friend at the Manhattan’s Port Authority Bus Terminal.

The main concept was to allow people to, action, play board, sports, and many other games in their homes television set. Spent almost $2,500 in materials and research, engineers were hired to assign the project; Baer worked five years in building prototypes for this revolutionary invention. In 1971, Baer and his hard worker team members Sanders Associates at Nashua, N.H., filed for the first video game patent.

Its copyright was later assumed in 1973 of April, which claimed as a constitutional monopoly for project, which would be used on a U.S. T.V set.

“I was fortunate to have spent a Sunday afternoon with him [Baer] earlier this year at his home in New Hampshire, where he agreed to be a guest on my podcast and show me around his workshop,”

“It was a magical afternoon that I shall remember for the rest of my life.”