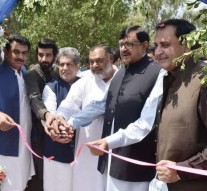 On the occasion of Tiger Day, a tree planting campaign has been launched by the district administration in which all government departments, PTI workers and members of the Tiger Force participated. A special function was organized on the banks of Lower Bari Do Ab canal. Where 2,000 saplings provided by the Forest Department were planted – ADC General Farooq Akmal represented the district administration in this special function on the direction of Deputy Commissioner Zeeshan Javed while former Federal Minister Nooriz Shakoor Khan, Civil Defense Officer Fareeha attended the function. Jaffer, DFO Malik Wasim Sajjad, Principal Government College Dr. Mumtaz Ahmed and other officers participated. Apart from this, other planting ceremonies provided by the Forest Department were organized by various departments where officers of the institutions and Employees planted trees – In his brief address on the occasion, ADC General Mohammad Farooq Akmal highlighted the usefulness of trees and said that the district administration has done all it can to achieve the target of planting 75,000 trees during the monsoon tree planting campaign. Necessary steps are being taken and Deputy Commissioner Zeeshan Javed is personally campaigning He urged all government departments not only to plant trees as per the target but also to ensure their irrigation and safety. Meanwhile, in connection with the tree planting campaign in all the colleges of Sahiwal division. Plants are also being planted and 2,000 saplings will be planted in the colleges of Sahiwal district.