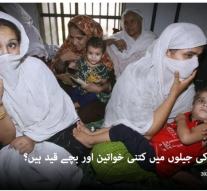 No Comments on How many women and children are imprisoned in Pakistani jails?

How many women and children are imprisoned in Pakistani jails?
Federal Minister for Human Rights Shirin Mazari has said that 1,121 women are lodged in jails across Pakistan in various cases while the number of children incarcerated is 195.
In a report submitted by Shirin Mazari to Prime Minister Imran Khan on ‘Plight of Women in Pakistan’s Jails’, it was stated that out of a total of 73,242 inmates in Pakistan, 1,121 are women who constitute 1.5% of the prison population. Are formed.
According to the report, 134 women prisoners live with children, bringing the total number to 195. Of the female prisoners, 46 are elderly and 10 are minors.
In addition to visits to nearby DHQ doctors, 24 female medical workers are available to meet the health needs of these female inmates, the report said.
According to the report on the plight of women prisoners, there are 727 women prisoners in Punjab, 205 in Sindh, 166 in Khyber Pakhtunkhwa, 20 in Balochistan and three in Gilgit-Baltistan.
66.7% of the cases of women in Pakistan’s jails are pending.
It may be recalled that on May 29, Prime Minister Imran Khan had constituted a committee to study and investigate the plight of women in Pakistan’s jails.
The committee, headed by Human Rights Minister Shirin Mazari, presented its recommendations to the prime minister four months later.
The report’s recommendations call for reducing the proportion of inmates on trial, developing alternative and non-final punishment measures for female inmates, and improving housing, education and rehabilitation programs in women’s prisons and barracks.