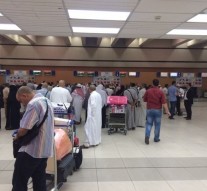 No Comments on Register on Abshar, wishing to return from Saudi Arabia

Register on Abshar, wishing to return from Saudi Arabia
Following the instructions of Servant Herman Sharifin Shah Salman bin Abdul Aziz al-Saud, the Saudi Interior Ministry has said that foreigners who have obtained ‘exit re-entry’ or ‘final exit’ visas and wish to return to their country. Register your ‘Abshar’ account immediately
Saudi news agency SPA quoted the Interior Ministry statement as saying that “foreigners living in the state have obtained visas for departure or departure, but they are traveling by air because of the Corona virus.” Due to the restrictions imposed, special arrangements are being made for them not to return home
The statement further said that ‘those wishing to return to the country should immediately feed their information to the Ministry of Interior’s digital account’ Abshar ‘to deal with their issues,
The Interior Ministry says, “Special arrangements are being made for those wishing to return home to the relevant government agencies. Travel arrangements will be made after review of applications received on the external account.”
After arranging the air services for the travel of foreigners and confirming the flight, the applicant will be notified via SMS on his mobile which will indicate the flight number and departure location, according to the passenger booking. Must buy tickets’
The Ministry of Interior explained the application procedure for returning to the Abshar account, stating that ‘Every person or headquarters will log in to their personal Abshar Account after browsing the’ Ada ‘in the Iqama number, date of birth, Submit the application online after entering the mobile number, departure and place of entry, name of the city to go to and where to go ‘.
The cities from which special flights will be operated are reserved for King Khalid International Airport in Riyadh, Shah Abdul Aziz International Airport Jeddah, Medina Manora and Prince Muhammad bin Fahd International Airport in Dammam.
The statement added that special permits will be issued to passengers residing in other cities to arrive at the nearest city airport so that they can arrive in those cities before their departure