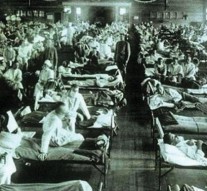 No Comments on When did Saudi Arabia suffer from epidemics?

When did Saudi Arabia suffer from epidemics?
Zahi al-Khaliwi, a member of the Saudi Society for History, has described the deadly epidemics in Saudi Arabia at various times, saying they had killed thousands.
According to the lesson website, Al-Khaliwi said that during the year 1809, there was a great epidemic in the area of Al-Dariyah – many people died from it – 30 and forty bodies were rising in one day.
Khalivi said that Imam Saud, who was the ruler of the kingdom at that time, had sent an open message to the people of Al-Dariyah which was recited in the mosques of Al-Dariyah – he had appealed to the people to give up their sinful lives. – Ask forgiveness from Allah Almighty for the shortcomings. By the mercy of Allah, this repentance is over.
Al-Khaliwi said that in 1813 there was another plague in Sadir, Munich – it had a fever and people died of it – it killed a lot of people – most of them died in Jalal. Where more than 600 women and men died.
Another major epidemic occurred in 1820. It was not limited to Saudi Arabia. It spread all over the world. There was abdominal pain, motion sickness and vomiting. The infected person would die within two or three days. The people of Al-Sadeer and Al-Ahsa were most affected by
The plague broke out in Shawwal before the pilgrims arrived. The locals used to call it Abu Zawiyah. Then on the 15th of Dhul-Qa’dah, the plague engulfed most of the people of Makkah and the Hijaz. Countless people died – the number of dead was so high that they could not find a burial – an estimated 16,000 people in Makkah were affected by the plague – only a few pilgrims from Syria survived the plague –
All the pilgrims in some parts of Najd, some fifty percent and some more died in the plague. Later, the plague struck again on the day of Eid al-Adha in the month of Dhu al-Hijjah. He would fall down and die while walking.
During their stay in Mina, the crisis intensified. The plague victims were seen lying on the streets. The pilgrims had returned from Mina in such a way that corpses were loaded on camels. The epidemic had intensified – the markets of Makkah were filled with people – there were so many dead that there was no one to bury them – the epidemic continued until 20 Dhul-Hijjah and gradually intensified.
Al-Khaliwi said that the plague struck in 1831 – it engulfed most of the countries – countless people died in it – houses were emptied of people – there were no people left to bury the dead in the houses – asset takers There was no one left. The corpses started rotting all over the area. The animals started moving around. They had no one to feed them due to which the animals died. The prayers in the mosques ended.
Al-Khalivi concluded by saying that the Spanish influenza pandemic had spread throughout the Arabian Peninsula in 1918, killing scores of people – mostly children and women – and killing at least a thousand people in Riyadh. The death toll in Aniza was about the same. The epidemic lasted for about 40 days.