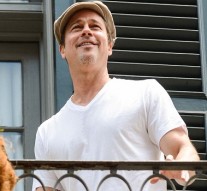 No Comments on We Want Tattoos Horrified the Father Brad Pitt

Yesterday the amusing news hit all newspapers when little kids demand tattoos from their celebrity parents Angelina Jolie and Brad Pitt. The couple Brad Pitt and Angelina Jolie has a collection of tattoos. Brad Pitt has 12 tattoo designs on his body while Angelina has 17 tattoo designs with a roaring tiger most appealing at her back. Brad Pitt and Angelina have six children, Maddox, 13, 6-year- old twins Knox, Vivienne and Shiloh,8-year-old eight, Zahara nine and Pax, 11.

In an Interview Ange said:

‘My kids rebelling would be if they all became brain surgeons. They’re already asking me about tattoos. How do I say “No”?’It’s especially hard for dads and girls,’ she said. ‘For some reason men get a little more sensitive when the daughter gets a tattoo. And Brad thinks the girls can do no wrong. He’s mush in their hands!’

The Tattooed Hollywood star and Unbroken director Angelina Jolie tells Radio Times that she has found it difficult to resist from visiting a tattoo parlor when her young children daughter Zahara nine and, son Maddox, 13 demand their own inking on their bodies like parents which always horrified their father Brad Pitt.

The tattooed couple also has strong views on whether their kids should follow their parent’s profession.

“We’ve always said, if they want to act, we won’t let them only act, because it’s not enough. They’ll have to find a real job at the same time. But I’m hoping that when they see all the other things in the world, they’ll be inspired to be writers, politicians, activists. They’re very individual people. So I imagine they’re not going to follow their mum and dad.”