Home / News / Sean Abbott Is Back With Bouncers 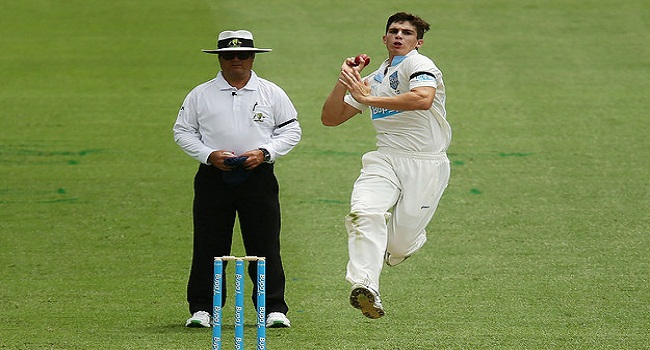 The Australian cricketer Sean Abbott twenty-two years old has made a hysterical return to cricket in the Sheffield Shield match against Queensland by SCG after the tragedy loss of Phillip Hughes.

The 22-year-old bowled the bouncer ball a fortnight ago which severely hit the 25-year-old Philip Hughes on the neck and cause his fatal death two days later. The brave young bouncer came on 12th over. As the talented bouncer, start his over stadium echoed with clapping from the little crowd at the Sydney Cricket Ground (SGC). It was the same venue where fatal ball hit the poor guy Philip Hughes on 25th November.

The pitch on which Phillip Hughes was badly hit by a bouncer will no longer be used this summer. Abbott starts his bouncing spell at fifth ball of his first over and took 2 wickets for New South Wales. Later he was joined by Mitchell Starc in making double progressive results in the second session.

After his successful delivery of clean bowl to Queensland’s Nathan Reardon who scored 6. At next over he bowled Ben Cutting for 3. On his wonderful sporty spirit the bowling, Coach Geoff Lawson of NSW admired the 22-year-old’s Sean Abbott sporty soul.

“He’s practiced well, he’s looked good but you never know what’s underneath the surface with young guys,” But the proof is in the pudding — he got onto this field and he did the business. He’s a young guy on the way up and he played like it today so I guess his mindset is a pretty good one “. said Lawson.