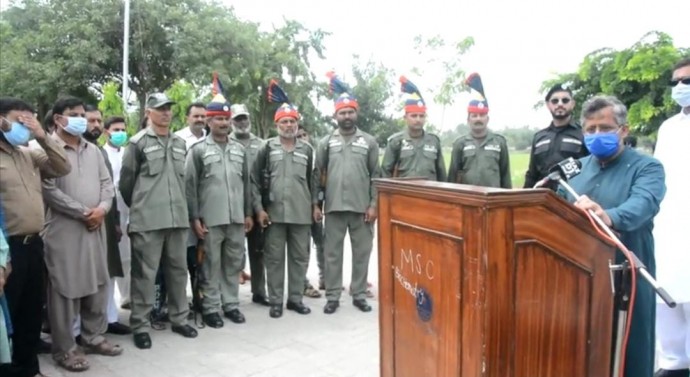 UO Celebrates Independence Day with Plantation
The University of Okara celebrated the 74th Independence Day with the inauguration of the massive plantation drive as part of the Government of Pakistan’s Clean and Green Pakistan Campaign.
The ceremony stated with the flag hoisting by the Vice Chancellor Prof Dr Muhammad Zakria Zakar. The national anthem was played with the guard of honor. The VC and the Academic Staff Association of the UO inaugurated the university’s large scale plantation drive.
Addressing to the ceremony, the VC said that Pakistan was founded with great sacrifices and the need of more sacrifices was still there. “The biggest sacrifice of today is to establish strong educational institutions as nations prosper only with education.”
He told that in order to prevent the pandemics like COVID-19, we had to make the environment clean and that could not be done without extensive forestation.
“The goals of sustainable development cannot be achieved without growing and preserving forests”, said Dr Zakar.
Hailing the Government’s nationwide plantation drive, he told that the UO would plant thousands of trees on its campus consisting of 204 acres.
The VC also applauded the contribution of his teaching and non-teaching staff for the development of the university despite unfavorable circumstances.